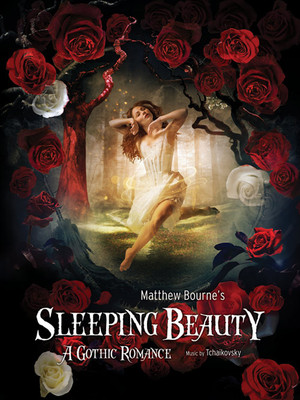 production images are from previous performance

A gothic romance; a supernatural love story that even the passage of time cannot hinder.

Matthew Bourne's third in his re-imagined Tchaikovsky series, Sleeping Beauty returns for its 10th anniversary production, filling the UK with majestic gothic beauty once more! The timeless tale of good vs evil is hitting the road on tour, where you're invited to witness a supernatural love story. A world of fairies and vampires awaits.

First danced in 1890, Sleeping Beauty is undoubtedly Tchaikovsky's most romantic ballet outing, as his score twists, enchants and moves alongside Charles Perrault's magical fairy story.
Bourne takes the tale back to that time, magnifying the era's fascination with the supernatural, from kindly fairies to dastardly vampires, before jumping ahead to present day, where the modern world yields even more mystery.

YOU ARE FEELING SLEEPY: THE STORY OF SLEEPING BEAUTY.

On the day of her grand christening, the Princess Aurora is admired by all in the kingdom, including a cast of fairies, ready to imbue her with the virtues she'll need in life. But one fairy is left off the guest list- the evil fairy! Furious, she bursts into the hall and curses baby Aurora, wishing her to die upon her 16th birthday, after pricking her finger on a spinning wheel. But all is not lost, the strong Lilac fairy, while not able to undo the curse, can adapt it, and instead Aurora will sleep...for 100 years...

When the time comes, the Lilac fairy bewitches the whole realm into sleep, joining Aurora in her sentence, as vines and trees grow up around the palace, hiding it from view. Finally, Aurora's saviour, Prince Desire arrives and plants on her true love's kiss, waking the Princess and kingdom just in time for a jubilant and triumphant wedding ceremony!

Some scenes may not be suitable for young children.Children under 5 will not be admitted.

Two hours and 20 minutes with one 20 minute interval

And before you stop reading

You may be required to have had a COVID vaccine in order to attend this performance or show proof of a negative test. Please contact the venue directly for more information on this.

Sound good to you? Share this page on social media and let your friends know about Matthew Bourne's Sleeping Beauty at Milton Keynes Theatre.

Keep up to date

I want email news and updates for events in my area! Read how we protect your data.

You know the drill, websites need cookies to make them work. Details of how we do it here. Hello! It's probably obvious, but we need to let you know that we use cookies to enable us to run this website and for it to actually work! You can find lots more detail in our Cookie Policy.
Got it!